Μετάβαση στο περιεχόμενο
Ancient Greek alphabetical numbers
The Greek alphabet is absolutely fundamental for the history of writing and for Western civilization as a whole (Ifrah, 2000).  As C. Higounet (1969) explains the Greek alphabet, quite apart from its having served to transmit one of the richest languages and cultures of the ancient world, forms the “bridge” between Semitic and Latin scripts. 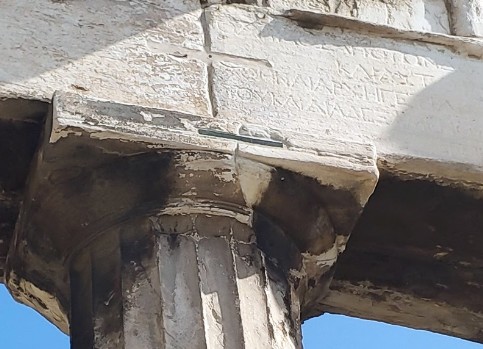 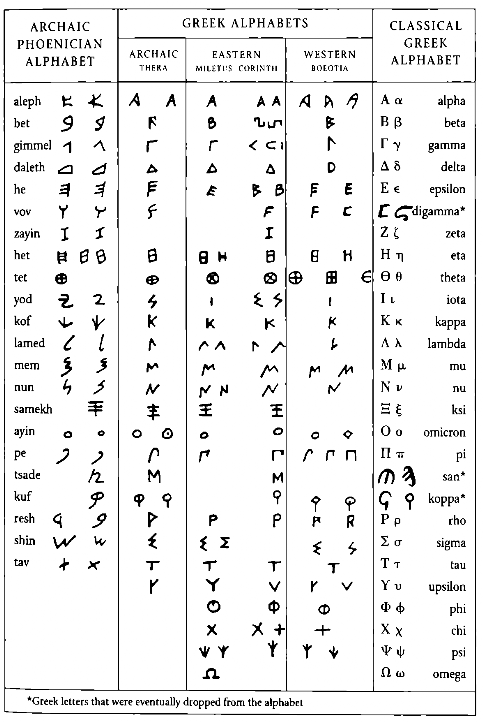 Historically, geographically, and also graphically, it was an intermediary between East and West; even more importantly, it was a structural intermediary too, in the sense that it first introduced regular and complete representations of the vowel sounds.
Cadmos the legendary founder of Thebes, is said to have brought the first sixteen letters from Phoenicia; Palamedes was supposed to have added four more during the Trojan War; and four more were introduced later on by a poet, Simonides of Ceos.
The Ancient Greek consists of the twenty-four letters of the classical Greek alphabet, plus the three obsolete letters, digamma, koppa and san.
The 27 letters are (University of St Andrews, School of Mathematics and Statistics, 2001):

These twenty-seven signs are divided into three classes.
The first, giving the numbers 1 to 9, use the eight letters of the classical alphabet, plus digamma, inserted in the sequence to represent the number 6.

The second class contains the eight following letters, plus the obsolete koppa, to give the sequence of the tens, from 10 to 90.
Finally the third class gives the hundreds from 100 to 900, using the last eight letters of the classical alphabet plus the san (for the value of 900).

Intermediate numbers are produced by additive combinations.
For 11 to 19, for instance, you use iota, representing 10, with the appropriate letter to its right representing the unit to be added.
Larger numbers were constructed in the same sort of way.
For example here is 269:

To distinguish the letters used as numerals from “ordinary” letters, a small stroke in placed over them.
Now this number system is compact but without modification is has the major drawback of not allowing numbers larger than 999 to be expressed.
Composite symbols were created to overcome this problem.
The numbers between 1000 and 9000 were formed by adding a subscript iota to the symbols for 1 to 9.

How did the Greeks represent numbers greater than 9999? Well they based their numbers larger than this on the myriad which was 10000.
The symbol M with small numerals for a number up to 9999 written above it meant that the number in small numerals was multiplied by 10000.
Hence writing β above the M represented 20000:

Of course writing a large number above the M was rather difficult so often in such cases the small numeral number was written in front of the M rather than above it.
An example from Aristarchus:

For most purposes this number system could represent all the numbers which might arise in normal day to day life. In fact numbers as large as 71755875 would be unlikely to arise very often.
On the other hand mathematicians did see the need to extend the number system and we now look at two such proposals, first one by Apollonius  and then briefly one by Archimedes.
Although we do not have first hand knowledge of the proposal by Apollonius we do know of it through a report by Pappus.
The system we have described above works with products by a myriad.
The idea which Apollonius used to extend the system to larger numbers was to work with powers of the myriad.
An M with an α above it represented 10000, M with β above it represented M^2, namely 100000000, etc.
The number to be multiplied by 10000, 10000000, etc is written after the M symbol and   is written between the parts of the number, a word which is best interpreted as 'plus'.
As an example here is the way that Apollonius would have written 587571750269: